On this page, you will find detailed descriptions of cache proxy service components, including what each component does and how you implement it. The following components are available:

Pre-sharding with consistent hashing dispatches object reads and writes based on a configurable hash function, spreading load across multiple cache servers. The cache proxy service uses pre-sharding to extend the total addressable cache memory space based on the number of Redis servers. Request keys are hashed, then requests are routed to the Redis server that handles that portion of the key range.

Redis with no persistence is used as the frontend cache proxy service, and Redis as a data server holds all data in memory. The addressable memory of cache proxy is limited. By employing pre-sharding, the total addressable cache memory space is extended by the number of Redis servers.

Redis client connections are a limited resource. Using the cache proxy service, connections may be spread across multiple Riak Redis Add-on (RRA) servers. This reduces the total required connections to the Redis server for the same key.

The read-through cache strategy of the GET command is represented by the following sequence diagram: 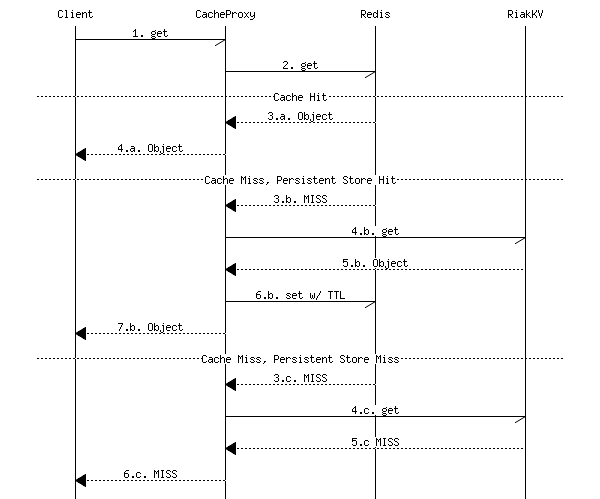 A short CACHE_TTL, for example “15s”, reduces a significant amount of read pressure from Riak, increasing performance of the overall solution.

The cache proxy service write-around cache strategy was introduced to provide a means to keep cache coherent with zero time to consistency with the underlying Riak TS data store for all writes that the cache proxy is informed of. For the Redis String (Value in TS) datatype, SET and DEL commands result in writes to the underlying Riak TS data store followed by a PEXPIRE to invalidate cache.

Of the three write cache strategies, the write-around cache strategy is the least prone to race condition, but least optimal for the read which immediately follows the write. In the overwhelming majority of distributed application data access patterns, the added certainty of cache coherency afforded by write-around over write-through is well worth the single cache miss. By definition, a key that is cached is expected to be accessed frequently, hence the single cache miss is expected to be followed by several accurate cache hits.

The write-around cache strategy of the SET command is represented by the following sequence diagram: 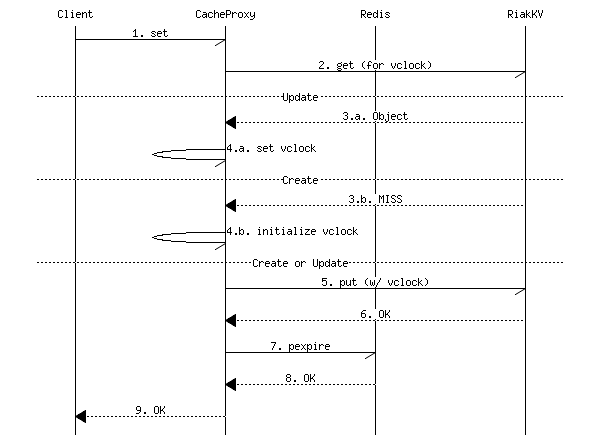 The write-around cache strategy of the DEL command is represented by the following sequence diagram:

For command details, refer to the Redis documentation.

The cache proxy service also supports the set of Redis commands supported by Twemproxy, but only to the point of pre-sharding and command pipelining, issued only to Redis. Refer to the Twemproxy documentation.

Important: While the cache proxy service does support issuing DEL commands, PEXPIRE, with a small TTL, is suggested instead when the semantic intent is to remove an item from cache. With write-around, the DEL command will issue a delete to the Riak backend.

With the combination of read-through and write-around cache strategies, the full object lifetime for a key-value is represented by the following sequence diagram: